You are here: Home » Articles » Geomechanics Around the World – Series 1

Geomechanics Around the World – Series 1

Spotlight on Gulf of Mexico Geomechanics

Salt domes are common in the GOM and due to their proximity to target reservoirs can pose drilling and completion challenges. The following challenges do not represent an exhaustive list but highlight some of the more common issues when drilling in/near salt. 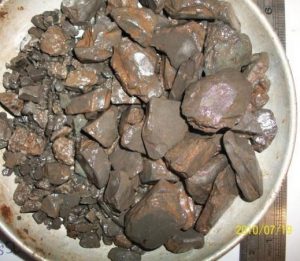 Shales in the GOM tend to react with water-based mud and can swell which can result in gummy cavings and bit balling. As this is a known issue in the GOM, most operators only use water-based mud in the shallowest hole sections to minimize the potential for drilling problems due to shale reactivity, such as tight hole. If it is not possible to use oil-based mud, the mud properties could be altered to minimize the weakening of the shale. Specifically, mud salinity could be increased to be at least equal to the formation salinity and the membrane efficiency of the mud could be increased. 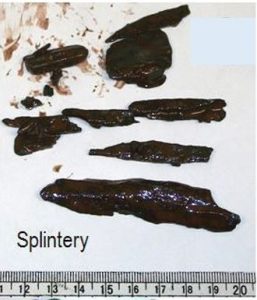 Many areas of the GOM have high overpressure, especially at depth, which requires careful planning. Mud windows can become very narrow when overpressure is high, especially considering new government regulations, but insufficient MW will cause the rock to break off the wellbore wall in splintery shapes (Figure 2). When splintery shaped cavings are observed, it is a good indication to increase your MW, provided there is room in the mud window to do so. New regulations which may further reduce MW window may require more advanced techniques and equipment to drill successfully, such as Managed Pressure Drilling (MPD).

Weak bedding planes have also been observed in the GOM. When there is low cohesion or a low coefficient of friction between beds, drilling at low angles with respect to beds can become unstable and require higher MW to maintain stability. Note that if beds have no cohesion, increasing the MW can actually exacerbate the instability by encouraging mud penetration between the bedding planes. Lost circulation materials can be used to help prevent mud from penetrating between the bedding planes. Drilling perpendicular to bedding is most stable, but is not always possible given trajectory constraints. Weak bedding is evidenced by platy shaped cavings (Figure 3). Drilling problems most often associated with splintery and platy shaped cavings are tight hole, pack-off and stuck pipe. A summary of cavings shapes and recommended actions is shown in Table 1.

*Note that if beds have no cohesion, increasing the MW can actually exacerbate the instability by encouraging mud penetration between the bedding planes.

It is important to understand that all wellbore instability is time dependent! Wellbore failure worsens with exposure time. This time dependency can be manifested in several ways. In some cases, there will be an initial indication of wellbore instability from cavings that will gradually worsen with time, despite efforts to correct the problem by varying mud properties. In other cases, there will be no initial indication of wellbore instability, but after the wellbore wall is exposed for a day or two, instability occurs. This delayed instability is probably most common in the case of creeping salt and reactive shale but can also occur in the presence of weak bedding planes, when there is time dependent mud penetration between the beds. Time dependent instability can even occur when there is no triggering geomechanical problem, due to fatigue of the rock after repeated trips, for example. It is important to plan a drilling program carefully to minimize exposure time and thus, instability.

While it is obvious it is very important to plan GOM wells carefully, pre-drill predictions will always have some inherent uncertainties. Many pre-drill PPFG models in the GOM rely primarily on seismic velocity, which does not always match actual well logs, depending on seismic resolution, processing and general quality. Additionally, relying only on seismic data makes it very difficult to calculate the high-resolution borehole collapse pressure (CP), which takes into account the PP and stresses, rock properties, well trajectory and allowable breakout/failure width. CP should be considered along with the PP when determining the lower bound of the mud window. Note that a 1D elastic model does not apply in salt and traditional salt management techniques must be used when drilling the salt interval, such as using a MW with density close to SV and salinity at or near saturation. Lost circulation materials and/or a lower MW may be required right below the salt if a rubble zone is encountered. Any potential permeable zones below salt should also be considered when designing the casing plan.

Figures 4A and 4B illustrate the importance of CP in well planning. In Figure 4A, we show a stereonet at a certain depth of CP for any well trajectory for a representative GOM well with PP = 14.7 ppg. The CP for a vertical well is 15.1 ppg, 0.5 ppg above the PP. Considering only the PP when determining the minimum safe MW to use could result in wellbore instability while drilling. Figure 4B shows a stereonet at the same depth of CP for the same representative GOM well with the addition of weak bedding planes. The beds dip 30 deg with a dip azimuth of 90 deg and have 300 psi of cohesion and a friction coefficient of 0.4. To see the impact of the presence of weak bedding on the CP simply compare the CP for wells drilled at high angles with respect to beds, with and without weak bedding. For example, a 60 deg deviated well drilled to the east has a CP of ~15.8 ppg with weak beds and ~15.3 ppg without weak beds. A lateral well drilled to the north or south has a CP of ~16.2 ppg with weak beds and ~15.5 ppg without. Not accounting for the presence of weak beds can result in severe wellbore instability. 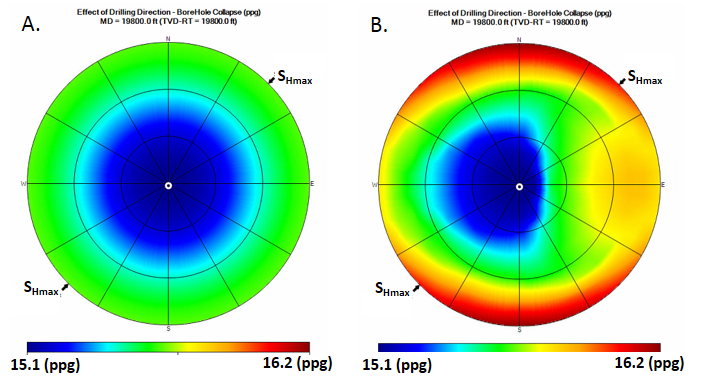 As previously mentioned, there are inherent uncertainties in any pre-drill model. There is also a need to respond rapidly to any wellbore instability event that occurs while drilling to minimize non-productive time and prevent a small incident from developing into a large, or even catastrophic, incident. It is the position of HXR Drilling Services that it is best practice in any high pressure, high-angle, or potentially complex area to combine a thorough pre-drill geomechanical model with real-time monitoring services. Please contact us for further information on how we can use our unique combination of drilling and geomechanics expertise to help you optimize your drilling plan, minimize exposure time and instability, and maximize your chances of a successful wellbore.