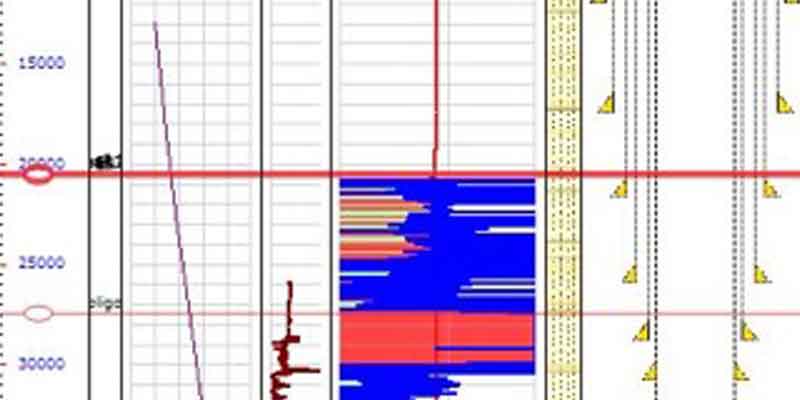 “I paid to send the entire crew to a 5-day ERD practices class, had an engineering study done, and put ERD hands on my rig — and I still got stuck!”

Maybe you have another problem, one that conventional ERD companies don’t address…

HXR Drilling Services’ Geomechanics Division provides solutions for wellbore stability uncertainties. Instability issues can be avoided by developing a geomechanical model based on data collected from regional offset wells using JewelSuite™, a 1D and 3D subsurface modeling platform. JewelSuite™ modular software platform is made up of PressCheck™ and WellCheck™, and is commonly used with another stress modeling program, call SFIB™. One essential function of the geomechanical model is to define stresses to avoid instability issues. This allows drilling personnel to develop a sound drill plan with the best mud weights, drill trajectory, and casing design.

This article describes how the horizontal stress aspect plays a critical part in wellbore instability. The stress data can be shown as a 1D graph, which provide data points at multiple depths and is characterized as a single 1D curve.

The Effective Stress Method calculates the maximum and minimum horizontal stresses from overburden stress, pore pressure and Shmin and SHmax effective stress calibration points. The equations used in this method are:

Where Sv is the vertical stress or overburden stress, PP is pore pressure, and SHmax and Shmin are maximum horizontal stress and minimum horizontal stress respectively. Additional information relating to stress state, such as LOT/FIT and RFTs, are plotted on the track along within the Horizontal Stress Model View as calibration points to generate interpreted trend lines. The Horizontal Stress View displays tracks for the interpreted pore pressure and overburden stress curves, as well as the calibration points for Shmin and SHmax. 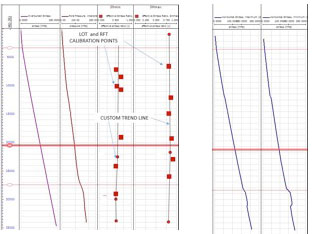 Figures 1a and 1b

Isotropic Tectonic Strain
Isotropic Tectonic Strain considers the Biot coefficient equal to 1. The first half of the equation represents the horizontal stress for a relaxed homogenous, laterally extended half space (uniaxial strain) after applying an infinite load instantaneously. The last term of the model corresponds to the tectonic strain. Where Eε is Young’s modulus in Pascals.

Figure 2. Overburden stress is in gold, interpreted pore pressure in red, and both maximum and minimum stresses are shown in blue. Additionally, the curves for static Poisson’s Ratio and Static Young’s Modulus are shown on the far left track.

The SHmax/Equilibrium method sets the SHmax parameter on one of the three stress states defined by frictional faulting theory. The frictional fault theory is a hypothetical theory stating 2 of 3 principle stresses need to be parallel with the surface of the earth (Figure 3).

Strike-slip faulting and reverse faulting regimes require that SHmax is the maximum principal stress magnitude. Strike-slip stress are typically seen in literature as SHmax > Sv > Shmin, whereas reverse faulting is shown as SHmax > Shmin > Sv. Within JewelSuite™ WellCheck™, the curves in the SHmax/Equilibrium Ratio View shows the results of the calculation in terms of normal and EMW’s (Figure 4).

Figure 4. In this figure, one track shows the curves as pressure (MPa) and the second is equivalent mud weight (EMW)

Mud weights can be evaluated for a target well to model wellbore failure along the well trajectory, which is dependent on the calculated stress state and rock properties. The Check Mud Weight View serves as a representation of the degree of breakout (BO), which is also referred to as the failed zone. The Check Mud Weight view displays the mud weight log in the first track and the break out width (BOW) and critical break out width (CBOW) in the second track (Figure 5).

Figure 5. The allowable weight is in blue, breakout width below critical breakout limit is green, and the exceedance of the limit is in red. In this particular model, the mud weight chosen for this offset well was a too high and viewing the caliper data versus the breakout (red circle) there appears to be problems at the bottom of the hole, perhaps a washout.

HXR Drilling Services’ Geomechanics Division provides solutions by producing a geomechanical model that defines stable wellbore trajectories and determines optimal mud weights based on stresses within the subsurface. This article covered stresses and pore pressures downhole to demonstrate the assessments that HXR Drilling Services Geomechanics has to offer clients, see Figure 5. The casing and mud weights can be designed and modified based on several different wellbore trajectories to find the most cost efficient plan.

Talk to HXR when you’re ready to plan your next horizontal or ERD development.